For the last couple of weeks, we’ve been looking into the fourth-grade history textbook We Are Texas to see how the state-approved educational material presents the origin story of Texas and the role that slavery played within it. We’ve looked at the anglicized Texas myth, the period of Anglo settlement, as well as the time just before and during the Texas Revolution. We know that the institution of slavery was extremely important to many of the early settlers, including their leaders, and that one of the biggest reasons Texians decided to break from Mexico was because Mexico was threatening to emancipate their slaves. We also know that when Texas declared its independence, the state’s leaders doubled down on their racism, drafting a constitution that went so far as to require free Black Texans to obtain the permission of legislators if they wanted to live in the state. But this is not the story presented in We Are Texas.

This week we look at the period just after the revolution, when Texas stood as its own nation for nine years. What role did slavery play in the way that republic was built? And how did it bring about—or delay—Texas’s eventual annexation to the United States?

The textbook describes how rapidly Texas’s population grew in the 1840s, but this 7,000 figure doesn’t include slaves. According to historical records, there were roughly 5,000 slaves in Texas in 1836, and 27,000 in 1845, when the republic became the twenty-eighth state in the Union. How did the institution grow? Did slaves have access to the colleges and schools mentioned in this passage? 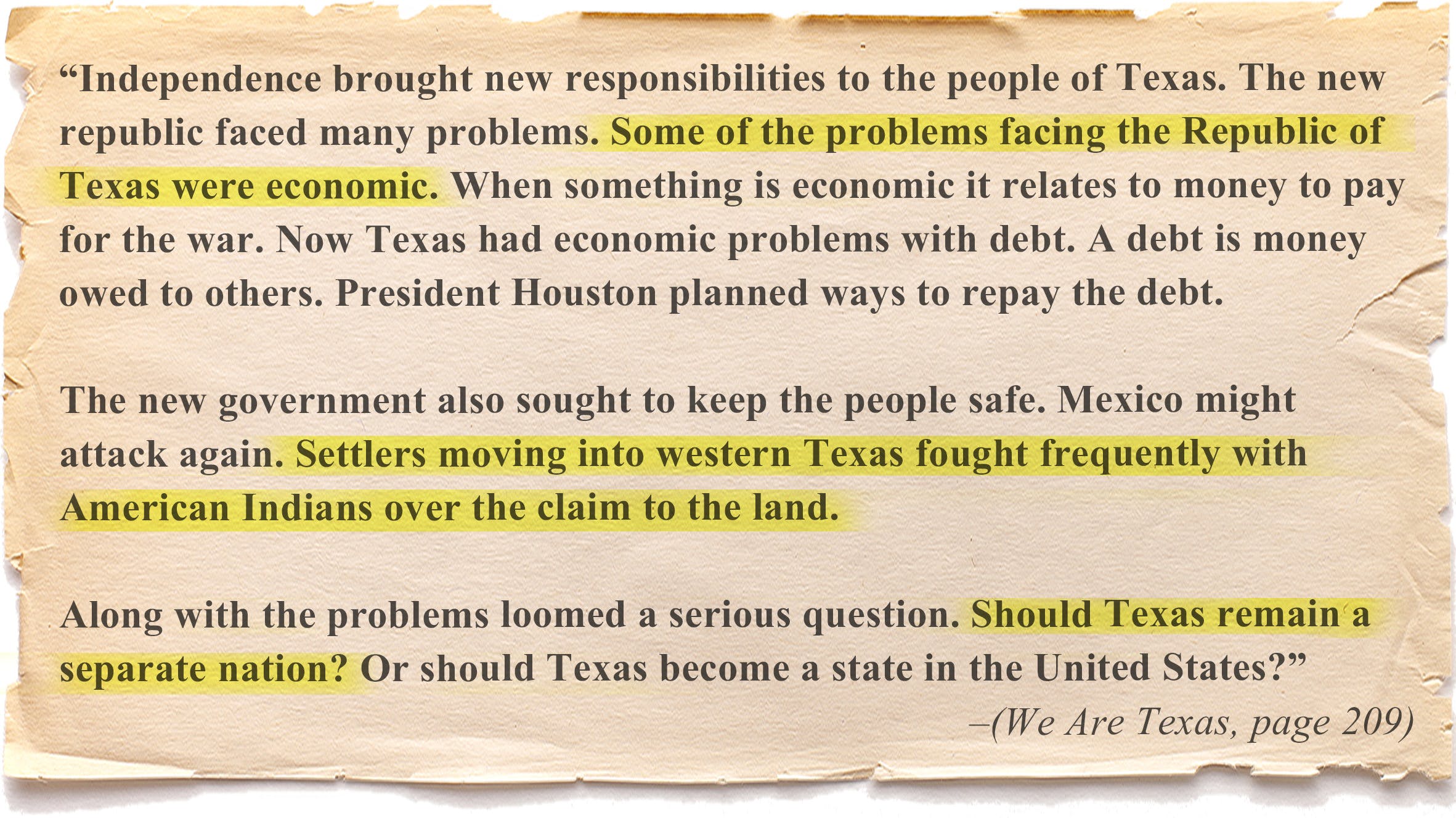 Sam Houston wanted Texas to join the United States from the get-go. So did Stephen F. Austin, who served briefly as the republic’s secretary of state before his death from pneumonia in December 1836. He sent William H. Wharton, a lawyer and plantation owner, to Washington, D.C., to push for annexation, using the republic’s booming cotton economy (and the threat of its competition with U.S. cotton) as a bargaining chip. But Wharton reported that U.S. secretary of state John Forsyth told him the U.S. couldn’t annex Texas right away because free states opposed admitting another slave state into the union at that time. When Mirabeau Lamar took over as president of Texas, the republic’s desire to join the U.S. annexation took a backseat. Slavery was a major reason why it didn’t happen, and why Texas remained its own nation for nine years.

This passage, while narrowly accurate, illustrates a consistent problem in this textbook and the greater Texas myth. It never names any individual as someone who supported slavery, in Texas or nationwide. For example, Austin supported slavery in practice; though he expressed some issues with it in theory, he worked very hard to maintain it in Texas during his lifetime. Why not say that Texas couldn’t be admitted into the union because it was aggressively pro-slavery? To bend the truth to keep the reputations of Texas settlers pristine is ahistorical and does a disservice to Texans everywhere. 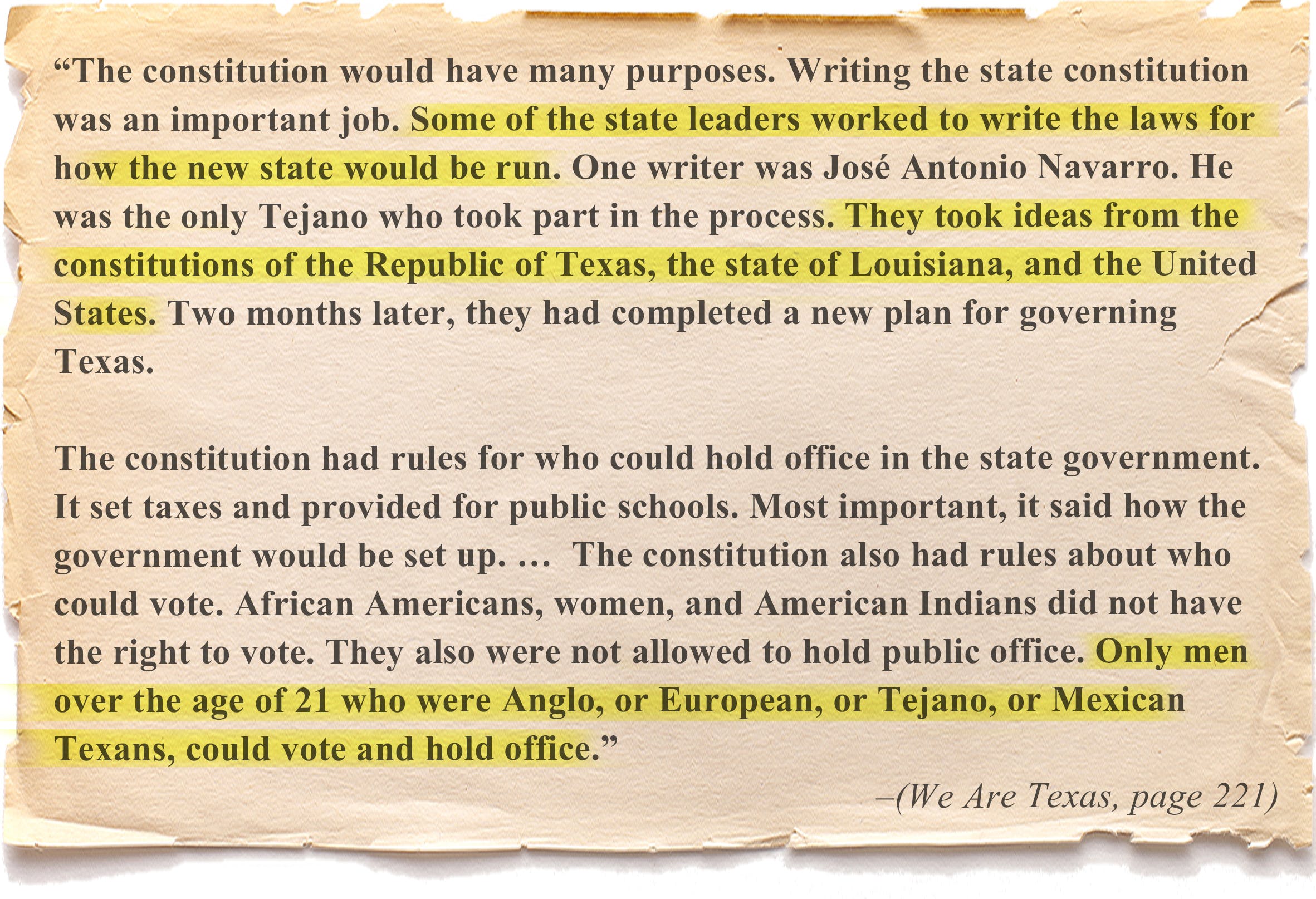 This passage details the 1845 constitution of the state of Texas. Annexation took place that year. Texas’s economy was in shambles because it relied heavily on the cotton industry, which was struggling at the time; a lack of reliable trade with other regions didn’t help, either. Mexico could invade at any time, and the republic did not have the means to protect itself. The U.S. leaders came to favor annexation of Texas as something of a competitive move, after Britain became more interested in developing a relationship with the republic.

The 1845 constitution was little better than its 1836 predecessor in regard to slavery. The state Congress couldn’t pass legislation emancipating slaves without compensating their owners, nor could it pass any laws against the continued importation of slaves into the state. It could pass laws allowing individual owners to emancipate their slaves. The 1845 version also gave Congress “full power to pass laws which will oblige the owners of slaves to treat them with humanity; to provide for their necessary food and clothing; to abstain from all injuries to them, extending to life or limb; and, in case of their neglect or refusal to comply with the directions of such laws, to have such slave or slaves taken from such owner and sold for the benefit of such owner or owners.” Also, “any person who shall maliciously dismember, or deprive a slave of life, shall suffer such punishment as would be inflicted in case the like offence had been committed upon a free white person, and on the like proof, except in case of insurrection by such slave.”

But by not at least hinting at the messiness of these details, the textbook keeps the issue of slavery abstract, which deflects responsibility from the state. Slavery and racism are concepts that tend to float around the margins of official and popular versions of Texas history, rather than being presented as driving forces in our origin story. To leave them in the past is to pretend that they don’t still resonate in the present.

I should note that We Are Texas does address slavery directly in its pages, in the chapter leading up to the Civil War. But this framing, too, is problematic. Texas history is consistently removed from the history of the rest of the American South. To relegate slavery to being a Civil War issue deflects responsibility from the state itself. The way it’s framed suggests that it was a phenomenon in the region, a problem of the past that Lincoln solved when he emancipated the slaves. We don’t have to reckon with what Texas, and our Texian heroes, did to maintain and expand the institution of slavery. We don’t have to acknowledge that the institution itself is one of the main reasons we became a colony, a republic, and then a state, in the first place. We don’t have to acknowledge that our very existence as a place was dependent on bondage, and we never say that Black Texans, free and enslaved, contributed to the history of this state just as Austin and Houston did.

By whitewashing the version of history we’re teaching to our youth, we’re just kicking a can down the road. “By the time [students] reach college classrooms and learn about this history, they feel betrayed by their teachers, they feel betrayed by the school system,” says Daina Ramey Berry, chair of the history department at the University of Texas at Austin. “They want to know about the complexities of our society. And they’re okay with hearing that and learning that there are some difficult moments in our history that none of us are proud of,” she adds. “They can handle it. Fourth graders can handle it. Kindergartners can handle it.”

The Best of Texas, in Your Inbox

Get our weekly newsletter.

The Story Behind the Story: “The Greatest Experience of Your Life”

The Story Behind the Story: “The Coming of Redneck Hip,” November 1973

The Secrets of Bonfire Shelter